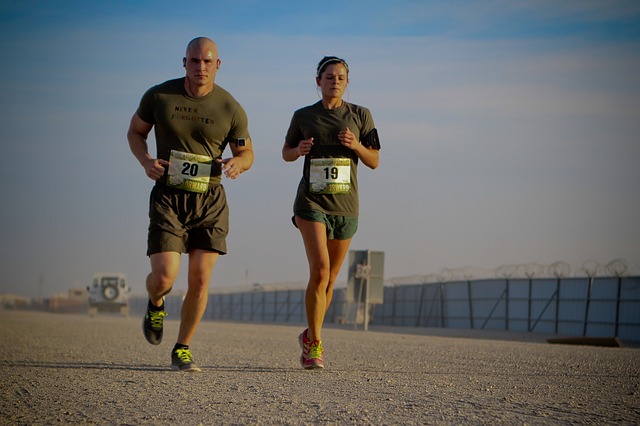 This month in Basingstoke we have the Croudace Festival 5k, a 5K run around the town centre, right past the office building I work, through a local park then back to the town centre.

I ran the very first one in 2013 with some friends from the other offices in the building where I was working at the time (funnily enough, opposite where I am now!).  For various reasons I hadn’t been able to put in as much training as I should have done (the topic for another blog no doubt!). Being one of the oldest there, I was not up to the standard of some of the people half my age…and their legs were longer than mine. Anyway, excuses aside… we all started running the race together and after a while, it was obvious that I wouldn’t be able to keep up with the rest of the team, so I told them to go ahead.  Someone slower than me had also told me to go ahead so I plodded on.

About halfway through the run my knee started to hurt, so I ended up alternating between running and walking.  What I had thought would be a fun event was not turning out quite the way I had thought.

I must admit that I started to feel sorry for myself and even felt annoyed that the others had left me, even though I had told them to.  I was also inwardly moaning to myself about how far I still had to go before the finish and how stupid I was for not doing enough training.  I was focusing on the pain in my knee and how miserable I was feeling.  There was a massive cloud of negativity above me and I had automatically drifted into negative thinking.

Whilst wallowing in self-pity, I suddenly had a thought…why not try some of that mindfulness malarkey I’d heard so much about?  I’d never done any mindfulness before but as I had nothing else mentally pressing to do at the time I thought “why not?”

Now it was actually quite a nice spring day so I started focusing on the moment…feeling the sun on my face…the wind in my hair (well a breeze actually – I wasn’t running that fast!)…noticing my breathing…smelling the fresh air (the benefit of not running with lots of other people!)…noticing how my muscles were moving…the sound of my feet on the pavement and the birds singing in the trees.  I was totally in the moment.  I’d stopped feeling sorry for myself.  I’d stopped thinking about how far away the end of the race was.  I wasn’t worrying about all of the things that had been dragging me down before and was now noticing how far I had come and noticing all of the milestones along the way.  Now I was actually enjoying a much more positive experience rather than letting it pass me by.  How lucky was I that I was able to experience all of these things?

So, what is my point?  Well sometimes when we set goals, we are so invested in the final objective that we lose sight of all the ‘wins’ and experiences along the way, no matter how big or small, and how great things actually are at that moment.  If your goal is too big and you haven’t noticed any of the small successes so far, you might just end up giving up, like I could have done on the run.  If this is so, then chunk it down into smaller goals, and celebrate those wins on the journey.  You make it to the gym three times that week…Hurrah!  You made a better food choice…Yippee!  You have been able to put your sock on without yanking your leg onto your knee…Bravo! You had a bad day but went to the gym instead of reaching for that bar of chocolate or tub of ice-cream… congratulations!

As with life itself, it is not all about the destination but more about the journey.  So,if you start to feel a little bit demotivated in respect of your goals, take a moment and practice a little mindfulness and stop slipping into those automatic and unhelpful ways of thinking and responding.

Once you have done this you could even ask yourself some helpful questions. Do you feel better than when you started your journey? Where are you now?  Have things improved?  If things aren’t quite going how you would like, what could you do to change that? Be practical rather than critical.

With any goal, there are going to be things that trip us up on the way, but it is how we deal with them that is important.  Don’t let yourself drift automatically into negative thinking. Rather than catastrophise or give up…take a moment to just appreciate how far you have come and how great that feels!